In the Clapham Classroom: When History Explains Current Events

At Clapham, we encounter many ideas as we read through our various subjects in class. These ideas take on new meaning when applied to contemporary situations. One idea we have been thinking about in Class Seven comes from our discussion of the American Revolution. The idea is expressed best in the Declaration of Independence.

The united colonies declare that they

are Absolved from all Allegiance to the British Crown, and that all political connection between them and the State of Great Britain, is and ought to be totally dissolved; and that as Free and Independent States, they have full Power to levy War, conclude Peace, contract Alliances, establish Commerce, and to do all other Acts and Things which Independent States may of right do."

Herein, the colonies do not request their independence from the colonizing power of Britain, but they state it. They then proceed to fight in a somewhat lengthy military engagement to establish their freedom.

This idea went global. Our studies have shown of the heroism of Bolivar and San Martin in South America, as well as the citizens of Mesolonghi in Greece who fought for independence from their own colonizing powers. Other stories show how struggles for freedom are not necessarily won in so straightforward a manner. A case in point is the complex situation of South Africa where the Dutch were overpowered by the English as colonizers. It would be a long time before any sense of resolution was achieved on the part of all parties involved in that region. In all of our studies this term, we have noticed how the idea of liberty from colonizing powers is a unifying feature of the nineteenth century. 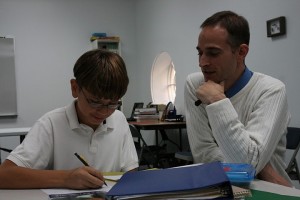 This idea is also fought for today. We were shown this during a lunchtime discussion with our Head of School, Mr. Reynolds. He brought to our attention the current uprising in Egypt. Because of our knowledge of history elsewhere, we were able to quickly identify how Egypt had undergone a similar history of colonization and liberation. Yet, a new element was brought up. Many of the countries around the world who have achieved some form of emancipation from colonial powers have found themselves unable to achieve full liberty because other, more powerful countries held significant political influence over them.

Our students recognized how the countries of the Middle East and North Africa emerged from an era of colonization into the era of the Cold War. The superpowers of the United States and the Soviet Union, though not colonizers, did much to influence these areas to their distinctive political ideologies. It was fascinating to observe how the students were able to empathize with the Egyptians who feel as though they have not been truly free for many generations.

Our discussion then turned to the different people groups in Egypt. We noted how the Coptic Christians might now be in a precarious position if a radical Islamic government is established. Through contemplating the difficult recent history of Egypt and the tumultuous events currently erupting there, our students have become motivated to pray for the peace of Egypt. They recognize that even more important than a proper political solution, they need the Gospel to help achieve true liberation and reconciliation.

Understanding the history of the last several centuries helps us make connections that are otherwise obscure. By understanding the historical context of this idea, we were better able to understand what is going on now in Egypt. We are also able to critique current events from the standpoint of sympathy and a shared commitment to honorable principles.