In the Clapham Classroom: On the Development of Good Taste

“How do people develop good taste?”

Mr. Barney asked this question of Class Six today during a poetry discussion.  The class has been studying the poetry of Alexander Pope, and today’s topic was his “Essay on Criticism.” Because Pope refers to “True Taste” in his second stanza, Class 6
considered the question:  Is there such a thing as Good Literature, that is, literature we should all agree is good?  One student suggested that some books are obviously better than others, and the rest of the class nodded their agreement.

Mr. Barney then asked the class to compare and contrast childish picture books (what Charlotte Mason would call “twaddle”) with good literature.  While the class acknowledged that twaddle is easy to comprehend and brings about a certain kind of pleasure, students asserted that good literature is more enjoyable over the long run.  They would rather read The Prince and the Pauper than Captain Underpants, for example.

This class is not composed of a randomly selected sample of American sixth-graders, most of whom would naturally gravitate toward silly books that provide immediate gratification.  This awareness of “goodness” in literature is a direct result of their exposure to good books. 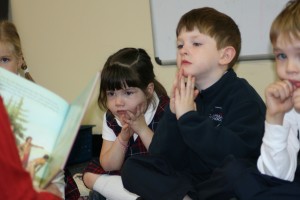 The students themselves may not know this.  They may not have been clued in to the following fact:  The stories they have been reading and hearing since they were five were all carefully chosen, not because they are accessible or entertaining, but because of their literary quality.

Let me pause a moment here to explain what I mean by such phrases as “literary quality,” “good literature,” and “good taste.”  Because these terms are difficult for even literature scholars to define, some might argue that good taste in literature is entirely based on subjective opinion.  However, most people who have been exposed to works of literary quality can tell the difference between good literature and twaddle, even if they cannot define it.  Here is the best definition I can come up with:  Good literature is enduring and universal in its themes and characters, and yet original and challenging in its style and call to action.  As Class 6 students tried to explain, because good literature presents a challenge, it is at first more difficult to approach, but because it deals with enduring themes and challenges the readers’ previous thinking, it ends up being more satisfying than simple-to-digest twaddle.

Plato believed, as do the architects of Clapham’s model, that exposure to certain types of stories affects children as they grow up.  In his Republic, Plato says of children and the stories they are told, “The beginning is the chiefest part of any work, especially in a young and tender thing; for that is the time at which the character is being formed and most readily receives the desired impression.”[i] Early exposure to well-written books develops a child’s innate judgment in favor of literature that is beautiful and enduring.  Clapham’s literature curriculum is based around this idea.

By reading and hearing books such as The Red Fairy Book (Explorers II/Kindergarten), A Child’s Garden of Verses (Class One), and Oliver Twist (Class Seven), Clapham students are exposed to classic works of literature which shape their tastes and enable them to distinguish between twaddle and good literature.  As Charlotte Mason says, “[Y]oung people who have been brought up on this sort of work may, we find, be trusted to keep themselves au fait [up-to-date] with the best that is being produced in their own days.”[ii]

The “abundant and delicate feast” of literature which teachers spread before their classes trains Clapham students to love that which is good, true and beautiful. As the Class Six students realized, good literature leaves a wonderful aftertaste and food for thought long after the book has been read.