"Israel is slightly smaller than New Jersey. Moses in effect led the tribes of Israel out of the District of Columbia, parted Chesapeake Bay near Annapolis, and wandered for forty years in Delaware."

Israel, the land of milk and honey, is a land that has stirred up the emotions of people and nations. This special place has also stirred up the senses of the travelers fortunate enough to spend time traversing its valleys and hills, float weightlessly in the strange waters of the Dead Sea, walk on the rocky shore of the Sea of Galilee, and marvel at the multicolored geology of the Maktesh Ramon. It is a land filled with ancient fortresses and caves with secrets yet untold. It is a historian's dream and an adventurer's paradise.

As we prepare our Upper School students for Clapham School's inaugural international trip, we thought it appropriate to pique your interest with some more engaging facts about this septuagenarian land with its history that stretches 5000 years.  For 5 must- see places in Jerusalem, read our tour guide, Brian Kelly's blog here.

The Sea of Galilee lies at the northern end of the Jordan River and is a region packed with Biblical significance. The sea itself is a rather tranquil body of water. You can easily sail across the waters and relive the trips Jesus and his disciples took when they escaped from the demanding crowd and when they weathered a storm. Look out on the rocky shore and imagine Jesus cooking fish for breakfast.

The main city situated on the shores of the sea is Capernaum.  This city is referenced several times throughout the Gospels. It is here where Jesus called his disciples and healed the sick.

On the eastern shore of the Sea of Galilee, Jesus drove demons, called Legion, from a heard of pigs. You can look up to the cliff, down which it is said the heard of swine threw themselves to their demise.

Nearby lies the city of Nazareth, the childhood home of Jesus, which is now commemorated by several beautiful churches that include the Roman Catholic Church of the Annunciation that marks the site where the angel Gabriel announced to Mary that she would bear a son, the Mensa Christi Church where Jesus dined with his apostles, and the Anglican Church of Christ.

To really soak in the whole experience, stay in a kibbutz, or Jewish commune, on the banks of the Sea of Galilee and watch the sunset over the western foothills, just as Jesus and his followers would have seen time and again.

Traveling south from Galilee, wind your way down the Jordan River Valley. You will soon encounter the major crossroads of both historical and current trade routes at the city of Jericho, one of the oldest inhabited locations on the planet. From Jericho, you can head to several notable sites in the valley.

In Qumran, hundreds of scrolls and fragments of Jewish texts were found in 1947. These scrolls date back to the 4th century BCE and dramatically changed the scholarly world as they provided vivid insights into the world and beliefs of the Old Testament. Trace the steps of the inhabitants of the Qumran community and marvel at the way these people lived and thrived in a desert environment.

Travel on to the natural spring of Ein-Gedi, an oasis in the terribly dry and empty Judean Wilderness. This is likely the location where David hid from Saul as he pursued him. After a 20 minute walk in the heat of the desert, drink in the cool water splashing over the unchanging rocks.

Finally, visit the fortress called Masada, where Herod once built a summer palace. On this isolated rock with views that stretch for miles, a group of zealous Jews took their final stand against the conquering Romans. The Roman siege ended with a mass suicide by the Jews. The adventurous traveler can hike up to the high plateau overshadowing the Dead Sea and walk through ancient fortifications. For all other travelers, an equally exhilarating ride is available in a cable car. 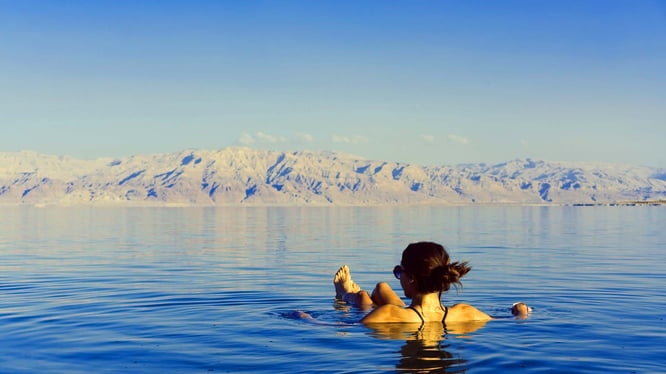 From Masada, proceed down to the lowest point on earth: the Dead Sea. This body of water, shared by Israel and Jordan, is aptly named. There are close to no living organisms in the water due to the high concentrations of salt. For reference, the world's oceans have a salinity of about 3%, whereas the salinity of the Dead Sea falls at 33%. The water is so salty, and consequently, the buoyancy is so increased, that you do not even need to tread water to stay afloat. Not only is the water very salty, but the temperature can range between 68 and 90 degrees Fahrenheit on account of being 1,412 feet below sea level.

A word to the wise, though. Think twice before you enter this eerie sea if you have unhealed cuts and scrapes. You will experience firsthand what it means to rub salt in a wound. While you are the Dead Sea, take some mud and rub it all over your body. Let it sit while you enjoy the view. The nutrient-dense mud is said to be an elixir for a host of skin conditions and inflammations.

Just east of the Dead Sea is the birthplace of Jesus, Bethlehem. The small city, in current Palestine, has a rich history dating all the way back to the time of the patriarchs. This village is where Rachel gave birth to Benjamin and then tragically died, and where David was crowned King and Jesus was born. The most popular destination in Bethlehem is the Church of the Nativity, built to commemorate the traditional location where Mary gave birth to Jesus.

The church was commissioned by Emperor Constantine, rebuilt by Emperor Justinian after a fire, renovated and expanded by the Crusaders, and today houses three different monasteries: Armenian Apostolic, Roman Catholic, and Greek Orthodox. The sharing of space is a common theme throughout Israel, as so many of the world's population lays claim to Christianity.

To the south lies the world’s largest erosion crater, Makhtesh Ramon. The heart shaped crater measures 40 kilometers long, 10 kilometers at its widest point, and 500 meters deep. This location is not as well known to westerners but is a stunning geological feature in the diverse landscape of Israel, and well worth the trip.

Located in the Negeb region, this crater is reminiscent of the Grand Canyon and is very sparsely populated. The only settlement of any size is Mitzpe Ramon, which caters mostly to hikers visiting the crater. The crater houses a unique habitat of plants and animals, with some 40 species of animals specially equipped to survive desert conditions.

Clapham School's Upper School students, traveling through the rugged Isareali countryside, hiking the hills, exploring the cities, and swimming in the seas will see history come alive before them. More than that, this trip will provide a perspective on scripture that is absent from a Western mindset. Smelling, tasting and feeling the same dust and heat as the patriarchs, apostles, and the Lord Jesus will not only affirm the truth of God's faithfulness in the past but will prepare their hearts for the future return of Christ and the kingdom he will establish on earth. What a priviledge!

Stay tuned for more blogs in our Adventure Israel Series. 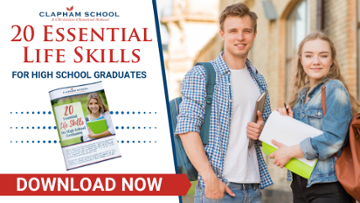