Peace on Earth: A Christmas Homily

If you’re like me or the poet Henry Wadsworth Longfellow, for that matter, Christmas time may cause you to wonder, just a little bit, about that confident angelic announcement: “Peace on Earth, Goodwill to Men!” In our more cynical moments, we may think to ourselves, “Peace on earth, really? When has there ever been peace on earth? From that first dark night when those humble shepherds heard the angelic host proclaiming peace on earth, throughout the long centuries of persecution, wars, injustice, slavery, crime, oppression, hatred and strife, when has there ever been peace on earth?” And perhaps we’ve heard the simplistic answer from well-meaning pastors or friends, that the peace is just that internal peace in our hearts that we experience through believing in Christ. But maybe that doesn’t quite sit well with us. Perhaps it seems like there should be more to it than that.

Well, we’re not alone in feeling the irony of the announcement of peace on earth. In fact, the paradox of peace on earth permeates many of the poems and scripture passages we’ve heard tonight. You don’t have to go too far into the background of the Christmas story to see cruel King Herod, sitting on his throne, using the scholars of Judea to secure his own rule against any potential usurpers. The Jewish historian Josephus tells us that Herod the Great ruled Judea ruthlessly, even murdering his own wife and several of his sons who tried to take power. Like many tyrants of old, Herod tried to manipulate the prophecies to his own ends, setting his murderous eyes on Bethlehem, where Micah had prophesied that “she who is in labor” would give birth to a ruler “whose [origin] is from of old, from ancient days”—who would arise to “shepherd the flock” of God’s people and [who] himself would “be their peace” (see 5:3, 2, 4, 5). 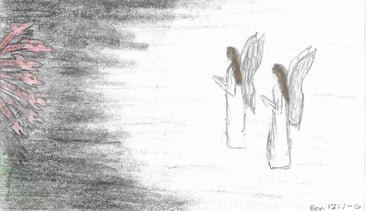 In the vision given to John in Revelation 12, we get just a glimpse of some of the cosmic realities going on behind the veil of earthly politics. Behind cruel king Herod stands the great red dragon, that old deceiver Satan, the father of all hatred, murder, war and strife, seeking to devour the babe to be born, the prince of peace who was to rule all nations. As Revelation and the Gospel of Matthew tell us, it’s only by the miraculous intervention of God that the baby is whisked away out of Herod’s murderous clutches and the dragon’s devouring heads. As John Donne’s “Nativity” explains,

“Stars and wise men will travel to prevent

Of course, while Jesus is snatched up out of danger, the “general doom” on Bethlehem still goes into effect, and the weeping and lamentation in Bethlehem present a stark contrast to the angelic announcement of peace on earth.

Herod’s murder of the innocents in Judea reminds us of the similar cruelty of Egypt’s Pharaoh in the days of Moses. Such ever has it been, with tyrants raising themselves up in rebellion against God and oppression of the poor and humble. But here the surprise, according to Matthew, is that Judea itself has become an Egypt, a place of famine and oppression, such that Joseph himself is betrayed by those who should be his friends and must make the journey down to actual Egypt. In this way, “out of Egypt I called my son” becomes a prophetic play on words as baby Jesus re-enacts the story of the people of Israel. Like a new Moses, he goes down into Egypt rather than out, fleeing for his life from the cruel tyrant, only to return to Galilee and settle in Nazareth, to be called a Nazarene, and await the time of Israel’s redemption. 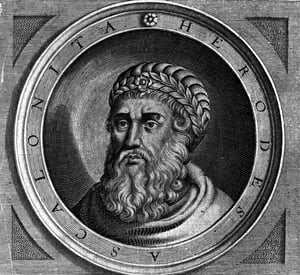 When Herod the Great dies, perhaps we see a little glimpse of “peace on earth” coming to pass. We know that he died ravaged by disease around 4 BC. In a way we can see Mary’s prophetic Magnificat being fulfilled, when she said that God would scatter “the proud in the thoughts of their hearts” and bring “down the mighty from their thrones” but exalt “those of humble estate” (Luke 1:51-52 ESV). Here we have Herod, in spite of his pretentions to everlasting tyrannical rule, toppled from his throne by disease. And in the same way, maybe this baby Jesus is the “sunrise… from on high” that Zechariah, John the Baptist’s father, talked about: that somehow this baby would “give light to those who sit in darkness and in the shadow of death, / to guide our feet in the way of peace.” (Luke 2:78b-79 ESV). Maybe this promise of peace on earth had to come in the midst of a war-torn and oppressive world; maybe the light had to dawn in the valley of the shadow of death.

After all, for Israel in exile, the voice crying, “Comfort, comfort my people,” also acknowledged the “warfare” and the “iniquity,” how Jerusalem had already “received from the Lord’s hand / double for all her sins” (Isaiah 40:1, 2 ESV). That righteous Nazarene, that “shoot from the stump of Jesse” who judges the poor with righteousness and will strike the earth with the rod of his mouth and slay the wicked with the breath of his lips (see Isaiah 11:1, 4 ESV)—such a figure is hardly good news unless you live in a world where wolves are devouring lambs, where leopards are preying on goats, and where cobras and adders, like Herod, are attacking young children with their venomous fangs. It’s a dog eat dog world: the survival of the fittest. The strong prey on the weak, everyone is out for his own and willing to trample over whomever he may in his race to the top. Everyone looks out for his own interests and not the interests of others.

And maybe that’s the point. Maybe the angelic proclamation of peace on earth is meant to speak to the warring and turmoil in our own hearts. Maybe the light of the angelic choirs must dawn in the dark night of our own souls. Maybe the simple statements of pastor or friend are not so simple after all. Maybe the war and strife and oppression out there is really just a reflection, just an outward manifestation, of the arrogant selfishness and rivalry in here, in our own hearts. Zechariah was on to something when he said that the Messiah would “guide our feet in the way of peace.” Christ’s birth itself was the greatest act of peace-making the world has ever seen, and it modelled for us a new mindset of humility. Instead of greedily grasping on to the rights of his godhead, Jesus emptied himself, entering into our suffering, oppressive world; instead of seeking his own power and dominance, he embraced obedience and love, even when it led to the shameful death of a rebel outcast; instead of coming to be served, he took the form of a servant, looking not only to his own interests, but also to the interests of others. In humility and self-giving is the way of peace. 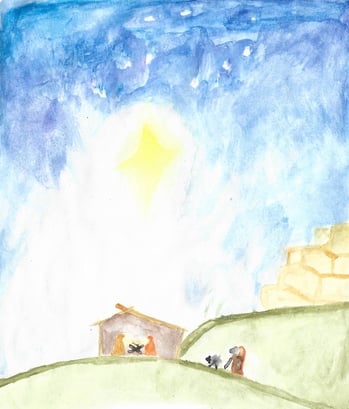 After all, this is why the angels appeared to shepherds, to those lowly and despised in Egypt and by the mighty and powerful in every time and place. Shepherds protect their lambs from wolves. They gently lead those with young. The Messiah himself will be a shepherd. And so must we. If we would hear the proclamation of peace, we must be men and women of goodwill, we must be those on whom God’s favor rests. We must confess that the humble, suffering servant reigns on the throne of heaven, and by believing in him be transformed into his likeness by the power of the Holy Spirit. We must then adopt the humble mindset, which is ours in Christ Jesus, and he himself will guide us in the way of peace. But not a peace which is only internal, it must include an external peace amongst ourselves as followers of Christ, and also acts of peace to a warring world. What would that be like, I wonder? What would it be like if Clapham School increasingly lived up to its name to be a community of peace, of harmony, active in the great task of Christian love, service and peace-making in the surrounding world?

“Surely the principles of Christianity lead to action as well as meditation,”

“Is it not the great end [or goal] of religion, and, in particular, the glory of Christianity, to extinguish the malignant passions; to curb the violence, to control the appetites, and to smooth the asperities of man; to make us compassionate and kind, and forgiving one to another; to make us good husbands, good fathers, good friends; and to render us active and useful in the discharge of the relative social and civil duties?”

In other words, the angelic proclamation of peace on earth, rather than causing us to doubt, should transform us into peace-makers. The bells of Christmas day should cause us to

Ring out false pride in place and blood,

The civic slander and the spite;

Ring in the love of truth and right,

Ring in the common love of good.

"Ring out, Wild Bells" by Tennyson

I wonder, will you hear the ringing bells and singing angels this Christmas, will you leave the darkness of your own interests to enact the peace of Christ through the work of the Holy Spirit?

This article was originally given as a homily at the 2018 Christmas Concert by Jason Barney, Academic Dean.