The Use of Original Languages in Our Faith

In a recent conversation with one of my pastors, we discussed the tact that is needed in a sermon to introduce technical language terms or excerpts from the original languages. It has always been odd to me how some listeners will become disinterested at the introduction of ancient languages in a sermon. 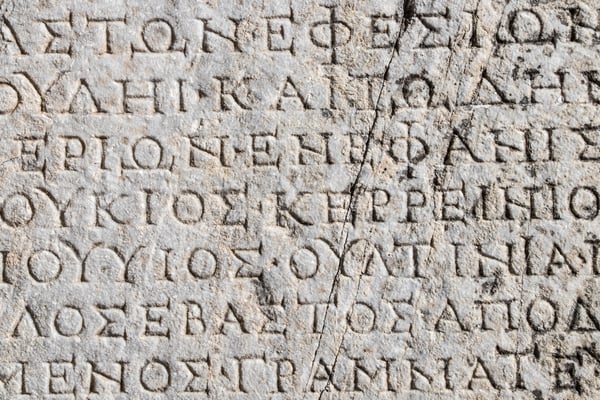 Maybe it’s because I was an Ancient Language major in college and these portions of church are my favorite, but it has always seemed a bit rude towards the word of God. The fact that pastors will acknowledge that it is difficult to talk about Greek words in front of the congregation is not an apprehension that they should have. Instead, I want to see a body of Christ that seeks to learn the original languages for all of the benefits they bestow on us.

Learning a new language can be hard. Learning an ancient language may be even harder. But learning the language that our New Testament was written in should be a privilege, not a burden. Before we get into some wonderful reasons to learn Greek, let me share something we already know. The Bible was written some two to three thousand years ago, to people in a land very far away from us, in a culture that is quite foreign to us, and it claims to be the Word of God. Too often I forget just how radical the Bible is. The English translations we have of the Bible are good. Some are even very good. The editors and translators of our English translations do their homework and really try to make sure all the content gets through clearly to us. But there will always be something missing, an element lost in translation. It’s something like when you hear a foreign language and are constantly translating versus simply understanding that language as is.

You’ll notice, though, that each and every one of those translators has spent years getting to know these ancient languages and for very good reason. Something has struck a cord in them. Whether it be their conversion to the faith, a revelation, a love of languages, or some desire to be closer to God, they have all embarked on the journey to know the languages God chose to record his Word. The language God chose for the New Testament is called Koine (Koi-ney) Greek.

When old historians were discovering the original Greek, they thought it was some angelic form that was straight from the mouth of God. But they soon found out that the Greek of the New Testament was actually just plain, every day Greek. It was given the name Koine, meaning common. God used the common tongue of the people to spread his Good News. I believe that by God revealing himself through simple language, it gives us the privilege  to translate the text into other simple languages for the purpose of evangelism. The art of translation is a beautiful process and it means that people around the world get to share in this same Gospel.

Yet, we are back to the point where we need a translation to read the Bible. Now, I know many people will never have the opportunity in their life to learn Greek, Latin, Hebrew, or some other ancient language. But, what if we do have the opportunity to learn them? Or have the opportunity to allow our children to learn them? Should we not seize this chance, or is it just too hard or too much time? If we believe that God deserves our obedience, then let us sacrifice our time and energy to draw us closer to him. Learning Greek, even at a low level, opens up wonderful possibilities to see God’s word in a way you have never seen before. One of my favorite benefits can be accessible even at an elementary level. I love studying individual words. We get to understand the central themes of books or letters by learning specific words. You can easily find out if this is a common or rare word; whether or not it packs a punch. If it brings about some connotation that we don’t have in English.

There are subliminal themes that we can find through studying certain words that just don’t have the same impact through translation. At a higher level, another benefit to learning Greek is comparing the different authors in the New Testament. Through English translations, many of the books of the Bible feel as though they were written by the same author. In the original language, we get to see the writers personality, their flair, their style, and even get a glimpse at who they were. Reading Paul’s letters will suddenly take on a different tone for each letter, and certainly a different one from Peter or John. These newly perceived differences and tones enhance the text so as to almost relive the experience of reading the Bible for the first time. An experience which many of us have long forgotten, but wish we could have back.

I encourage you, then, to take a step in learning just a small amount of an ancient language. If it is Latin, learn some of the history of the Vulgate, or how some of our Christian liturgy relates to Latin roots. If you choose Greek or Hebrew, you will quickly find you need to learn a new alphabet. It is actually quite fun to be able to know a completely different set of letters. From there, look at John 1:1. It is one of the most recognizable passage in the Bible and you will be able to read it in its original form. Look up on the internet or a concordance the meaning for logos (λογος) or arche (αρχη). If you choose Hebrew, get through the alphabet and try to memorize a famous prayer. Actually, here’s a really fun idea: go watch the Prince of Egypt movie and you can learn the Song of Miriam after they survive the crossing of the Red Sea. Whichever route you choose, pursue it with intentionality. I promise that you will quickly discover more about God and his Word, in a way you may never have expected.