The Inspiration of the Muses

From time immemorial artists and musicians, poets and playwrights have claimed that their artistic productions came not from themselves or their genius, but from some power or divinity outside and beyond them. They were inspired and became the conduit for something beautiful to come into the world. 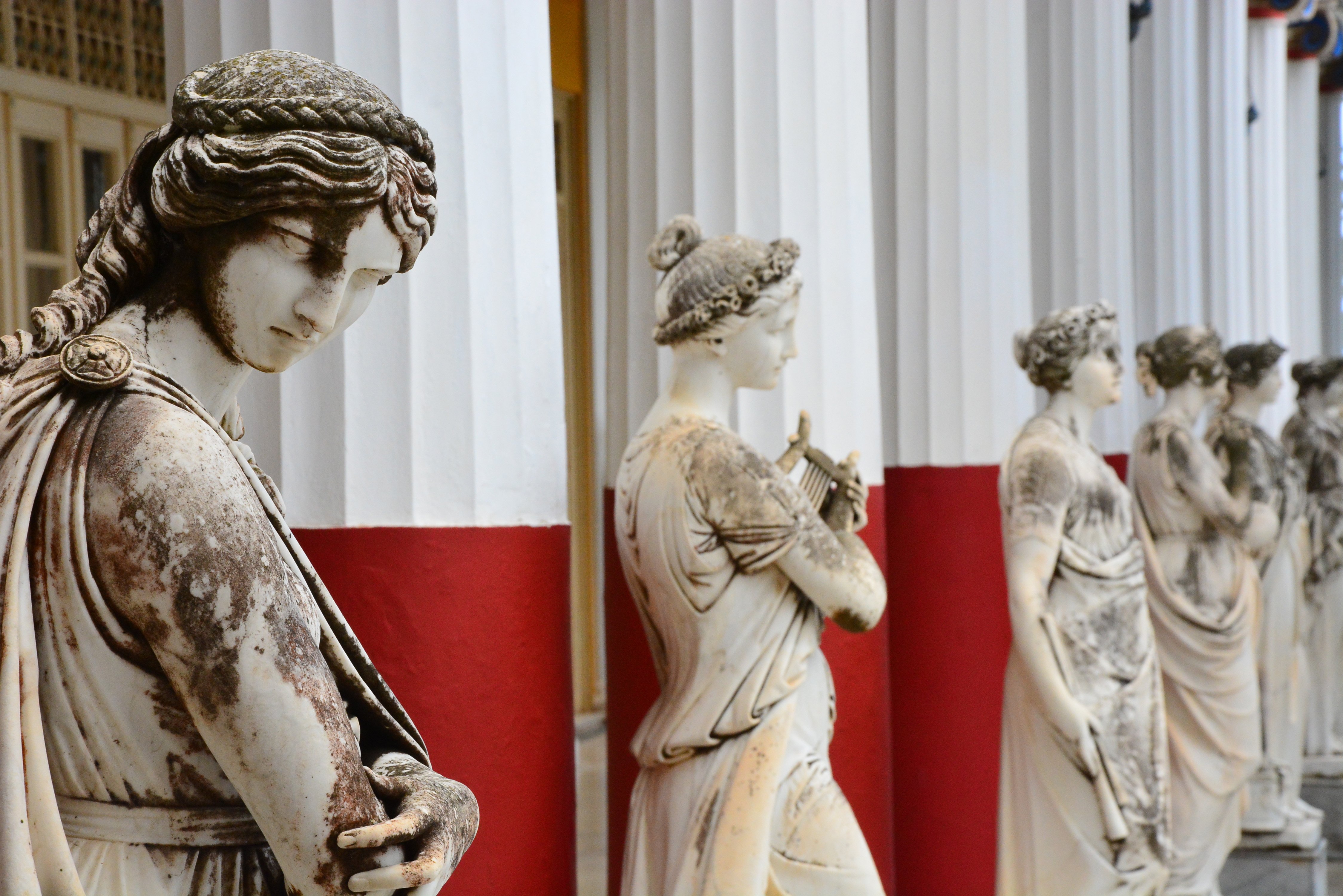 But inspiration has fallen on hard times. Our pop-stars today rarely claim to be dependent on some higher power, and, given their canned lyrics and simplistic chord progressions, maybe they’re right! They did write that song all on their lonesome, or perhaps with the help of a hit song computer program. Either way, in our materialistic modern world, we have little sense of where true genius comes from. The artists themselves are our idols, our gods and goddesses, and we have a cultural memory the length of a toothpick, stretching as far back as the last top forty chart. But it wasn’t always so.

In ancient Greek mythology inspiration came from the Muses, the daughters of Zeus and Mnemonynē, Memory herself. Here was a recognition that inspiration doesn’t come from nothing or from a process of self-discovery, but from the memory of the great music, poems, art, and writings that have come before. The master artist is ultimately reliant on the tradition, in order to give birth to new ideas. In the opening of his Theogony Hesiod names the nine Muses and describes their gift to him of song and the knowledge of the past: they “breathed into me a divine voice to celebrate things that shall be and things there were aforetime” he says (trans. Evelyn-White, lines 31-32).

By later Roman times each Muse presided over one particular art: Calliopē, epic poetry; Clīo, history; Euterpē, flute-playing (and lyric poetry to the flute); Melpomenē, tragedy; Terpsichorē, choral dancing and singing; Eratō, the lyre and lyric poetry; Polyhymnia, hymns to the gods; Urania, astronomy; and Thalia, comedy. The common factor that many of these were recited to accompanying music gave rise to our term ‘music’ today, though all the genres of poetry, as well as history and astronomy were included as ‘musical’ subjects. The ‘museum’ too was originally a place where all these arts—and learning generally—were cultivated; the most famous museum was founded by Ptolemy I Soter in Alexandria and was distinct from the well-known library, instead housing scholars and artists who lectured and wrote and discussed the great works.

It may sound strange in our culture where education is viewed primarily as job preparation and knowledge is judged by its practical usefulness, but the Greeks took their songs and dances, their plays and epics, incredibly seriously. The muses and their inspired human mouthpieces were the educators of the Greek city-state. They kept the collective memory alive, attuned the heart to what really mattered in life, and presented the mind with the deepest problems to ponder. Through the dances, the body too was trained to love what was lovely.

Of course, among the Greeks those weren’t always the things that St. Paul would have called lovely, excellent, or praiseworthy (see Phil 4:8). But the point still stands that the Greeks, like most other ancient peoples, didn’t see their ‘musical’ performances as neutral entertainment, but as an education in love—what Kevin Clark and Ravi Jain have termed ‘musical education’ in their book The Liberal Arts Tradition. In our day, lured by the myth of modern consumerism, we feel that we are simply consumers of whatever entertainment seems to tickle our fancy, and that we can walk away unscathed, unshaped, uneducated by the musings of our hearts.

The Romantic poet Percy Shelley put it best when he concluded his essay “A Defense of Poetry” with the memorable claim, “Poets are the unacknowledged legislators of the world.” Perhaps we can suppose that it was the Enlightenment and its ideal of the perfectly rational individual, coupled with the open consumerism made possible by the printing press, that led us to no longer acknowledge the poets’ power. Earlier in his essay Percy Shelley had explained further what he meant by this legislative power of poets:

“But poets, or those who imagine and express this indestructible order, are not only the authors of language and of music, of the dance, and architecture, and statuary, and painting: they are the institutors of laws, and the founders of civil society, and the inventors of the arts of life, and the teachers, who draw into a certain propinquity [nearness] with the beautiful and the true that partial apprehension of the agencies of the invisible world which is called religion.”

According to Shelley, it isn’t just that the poetry and art of today will form the morals of tomorrow, it’s that works of the imagination form the basis for society and culture, tune our sense of what is beautiful and true, and therefore have an inspirational, religious, almost spiritual quality to them. The danger comes when we don’t acknowledge this power and its educational value.

Shelley’s idea was not new. In fact, the power of this poetic or musical education, whether for good or for evil, has been a hallmark of classical education going back to the earliest philosophers. It was what led Plato to his censuring of the poets and craftsmen in the Republic, along with his search for what would truly embody the beautiful and good. The climax of this part of the dialogue is worth quoting at length:

“Is it, then, only the poets that we must supervise and compel to embody in their poems the semblance of the good character or else not to write poetry among us, or must we keep watch over the other craftsmen, and forbid them to represent the evil disposition, the licentious, the illiberal, the graceless, either in the likeness of living creatures or in buildings or in any other product of their art among us, that our guardians may not be bred among symbols of evil, as it were in a pasturage of poisonous herbs, lest grazing freely and cropping from many such day by day they little by little and all unawares accumulate and build up a huge mass of evil in their own souls. But we must look for those craftsmen who by the happy gift of nature are capable of following the trail of true beauty and grace, that our young men, dwelling as it were in a salubrious region, may receive benefit from all things about them, whence the influence that emanates from works of beauty may waft itself to eye or ear like a breeze that brings from wholesome places health, and so from earliest childhood insensibly guide them to likeness, to friendship, to harmony with beautiful reason.” (3:401b-d; trans. Paul Shorey)

What a surprising vision of the educational project! To feed souls with good herbage and help them avoid grazing in poisonous pastures, so that they grow up to be the friends of Reason. Such notions offend the sensibilities of our modern moral relativism.

Aristotle also acknowledged how musical education has the power to inspire and set the course of a person’s life trajectory. In his Politics he claimed that there were four “customary branches of education”: reading and writing, which would develop into the liberal arts (see later blog articles); gymnastic exercises (see “The Training of the Gymnasium”); and music, “to which is sometimes added drawing” (3.1337b; trans. Benjamin Jowett).

Aristotle then discusses how some might raise a doubt about whether music should be a part of the curriculum, since it doesn’t seem to be useful in the same way that reading and writing and gymnastic training are. But then he argues that leisure is the higher goal and purpose of occupation, giving the lie to our modern utilitarian notions of education, and that therefore “there are branches of learning and education which we must study merely with a view to leisure spent in intellectual activity, and these are valued for their own sake” (3.1338a). Then, after a single chapter on gymnastic, he spends three on music, in which he is primarily concerned with the moral influence that it exerts, whether noble and virtuous or passionate and vulgar. In fact, Aristotle can refer almost off-handedly in his Nichomachean Ethics to the idea that someone who is not brought up well in good habits cannot listen intelligently to lectures on political science, or about what is noble and just (1.3-4.1094-5).

But as Christians how do we make sense of this inspirational power of musical education? Well, the apostle Paul from prison in Rome wrote a letter to the Roman imperial city and Augustan colony of Philippi, complete with its theater, gymnasium and pagan temples. In it, he penned one of the most important directives for Christian musical education:

What is stunning about this is its inclusive grasp over all the good things worthy of thought, emphasized by the anaphora, “whatever is…” What else could explain why it was that Christians did not ultimately reject wholesale the classical liberal arts tradition of Greece and Rome? At the same time, there is a call to wisdom and moral discernment in our musings at least as stringent as Plato’s and Aristotle’s.

As a Christian school, informed by the classical tradition, we seek to harness the inspirational power of musical education at all stages of our curriculum. Our mission itself begins, “Clapham School inspires students…” thus indicating our commitment to an inspirational model of education, rather than the merely informational, or the utilitarian skill-training of most modern schools. We recognize that education is about shaping loves, tuning hearts and inspiring fruitful lives, rather than simple job preparation. Because of this we have a robust commitment to the arts, to reciting beautiful poetry, memorizing Bible passages, relishing lovely paintings, singing worthy songs, and discussing inspiring ideas. We set aside class time for neglected subjects like Artist Study, Poet Study, and Composer Study. But even in core academic subjects like science and math, we take time to appreciate their beauty, engaging in Nature Study, for instance, alongside the higher order academic attainments.

Some might worry that devoting such time to inspirational subjects lowers our academic standards or rigor, but our experience has shown that it actually ignites students with the fuel and power for study; after all, the Latin word studium first meant ‘zeal, eagerness, or interest’ before it ever referred to academic studies. As the British educator Charlotte Mason said, the true test of education is not how much a student knows, but how much he cares, and about how many orders of things he cares. For an example of how musical education helps us raise academic standards we need look no further than our annual middle school Shakespeare play.

Where else do students learn to love and relish the lines of Britain’s great bard, when most high school and college students are knocking their heads against his Elizabethan English and lifting up their hands in despair? And who knows, perhaps some of our own students, nourished throughout their youth on such a feast of the lovely, excellent and praiseworthy, will go out and be the next great Christian artist, composer or playwright to re-tune our hearts to the things of God?