My relationship with cursive handwriting is one that is probably not uncommon to many, up to a point. It began when, in the upper half of primary school, I had to begin practicing my D’Nealian letter forms in order to prepare for the transition to cursive.

At that point in time, I can remember eagerly anticipating when I would be master of a new, seemingly mysterious and beautiful writing style – I would be writing in the same manner as the big kids and grownups. Over the course of the next several years, my skill in cursive handwriting waxed and then waned, due to the mixed expectations and standards of teachers and professors throughout junior high, high school and college, to say nothing of the advent and rise of the personal computer. Not unexpectedly, the visual quality of my handwriting took a severe turn for the worse, occasionally even hampering my ability to communicate.

In the last three or four years, I have been compelled by circumstances, to examine and improve upon the quality of my handwriting. This relationship was begun out of obligation (I was going to be teaching it to grammar school students), but has since burgeoned into something more. During a professional development seminar I was introduced to a Spencerian script to which I gravitated personally. I bought a nicer fountain pen shortly thereafter (the use of which has been tremendously inspiring, and something I cannot recommend enough for older students), and have been improving upon my handwritten cursive since that time. 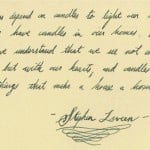 While my own relationship with handwriting has developed and become something quite meaningful to me personally, its value as a key part of an educational curriculum has been questioned more and more in recent years. The primary critique leveled against handwriting instruction seems to be that it takes up instructional time that could otherwise be devoted to matters of greater import; after all, with the proliferation of keyboard and tablet based communication and productivity devices, doesn’t the eventual demise of the handwritten composition appear to be a foregone conclusion? 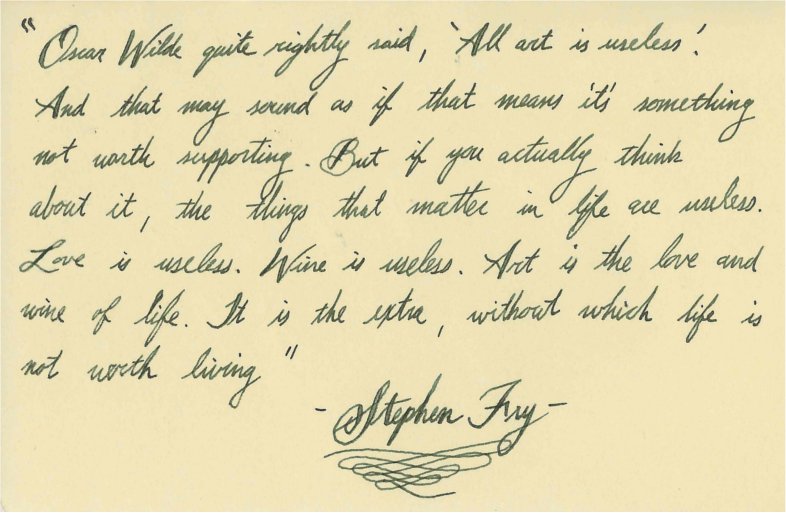 Apart from a purely personal reaction against this line of thought, the most rudimentary and informal of web searches on the topic reveals that the jettisoning of handwriting instruction and standards—due to perceived obsolescence—may be somewhat premature. While this is not the appropriate medium in which to conduct an exhaustive survey of current research and attitudes on the subject, or to build a strong defense of the handwritten word, I will summarize a few of the findings and my own thoughts on the subject.

Among the positive effects of handwriting mentioned in the various articles I unearthed were the stimulation of areas of cognition within the brain, the improvement of fine-motor skills and better hand strength. The principal of one institution attributed success in writing and reading comprehension, in some measure, to the flowing rhythm of cursive handwriting, and in another school, cursive handwriting was being employed purposefully in order to aid dyslexic students (and others with similar conditions) in properly reading and writing words and sentences–that is, the natural flow from left to right of connected letters in cursive words deterred students from making switches in word and letter placement and helped to improve literacy and comprehension. While the results of my brief investigation did not address this point, it strikes me that for all of our technological advances – word processors and spell checkers, email and texting – and for their admitted convenience, the average attempt at written communication does not seem to have benefited from these “helpful” technologies. I would wager that we misspell, use poor syntax and grammar, and generally handicap our attempts at written communication more than ever.

Another article advocated the of retention of handwriting skills and literacy as a means of remaining connected with our past history, noting the use of cursive script in many of our nation’s historical documents. The same article spoke of the personal touch with which handwritten communication is endowed, far more than anything typed. Alluding to this same personal aspect, a literacy expert alluded to the necessity of having legible handwriting because of its ability to communicate, not just in its content, but through its form, something about the author–that is to say, fair or not, readers form judgments about an author’s ideas based on the legibility of that author’s handwriting.

Still another article likened the handwritten composition to what could arguably be called the “obsolete” technologies of the candle and the bicycle. While certainly these have been “improved” upon by the more efficient electric light bulb and motorized vehicles, candles and bicycles still exist today and enrich our lives in ways that electric lights and automobiles do not. In his words,

“None of us depend on candles to light our homes, but all of us have candles in our home. Why? Because we understand that we see not only with our eyes but with our hearts, and candles are one of the things that make a house a home. Older technologies must spend their time in the attic before they are rediscovered. This is happening now with wholesome, heritage foods, and, through the Slow Foods movement, helping us understand that in so much of life, real living isn’t about speed but about savoring” (Leveen, 2012).

This is a brief summary of some of the responses to the topic which I uncovered in a short investigative search on the web. Interestingly, while I appreciate the academically minded studies which link handwriting to improved comprehension and cognition as an educator–that is, proving its usefulness toward some other end, the points which struck a chord with me most were those alluding to the more intangible or “artistic” qualities of the handwritten. In fact, when I think about it, there is a danger in suggesting that something’s utility should be the basis for its value. At Clapham we desire to put before our students the inspirational–the good, true and beautiful. The beautifully written, not only in its content and structure, but in its literal form, is an element of that. Given proper attention and due care, it is even elevated to an art form in its own right, namely, the art of calligraphy. I have recently finished reading Oscar Wilde’s The Portrait of Dorian Gray, and I think he has something to say in the introduction of his book that is appropriate to the topic. He states, “All art is quite useless.” British actor Stephen Fry, an artist in his own right, expounds briefly on this topic better than I can, stating,

"Oscar Wilde quite rightly said, ‘All art is useless’. And that may sound as if that means it’s something not worth support­ing. But if you actually think about it, the things that matter in life are useless. Love is useless. Wine is useless. Art is the love and wine of life. It is the extra, without which life is not worth living” (Stephen Fry in America, 2008). 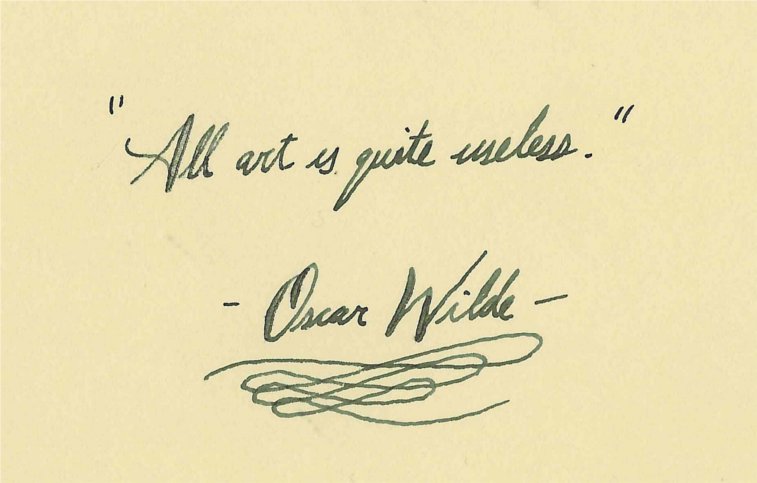 I hope that these reflections upon the skill of handwriting and its value have provided the reader with food for thought. I have benefited from a much improved relationship to my own handwriting over the last several years and hope that, if nothing else, I sparked the interest of any who may have written off the value of the handwritten word.